Did you felt it? — Two Years after the Earthquake 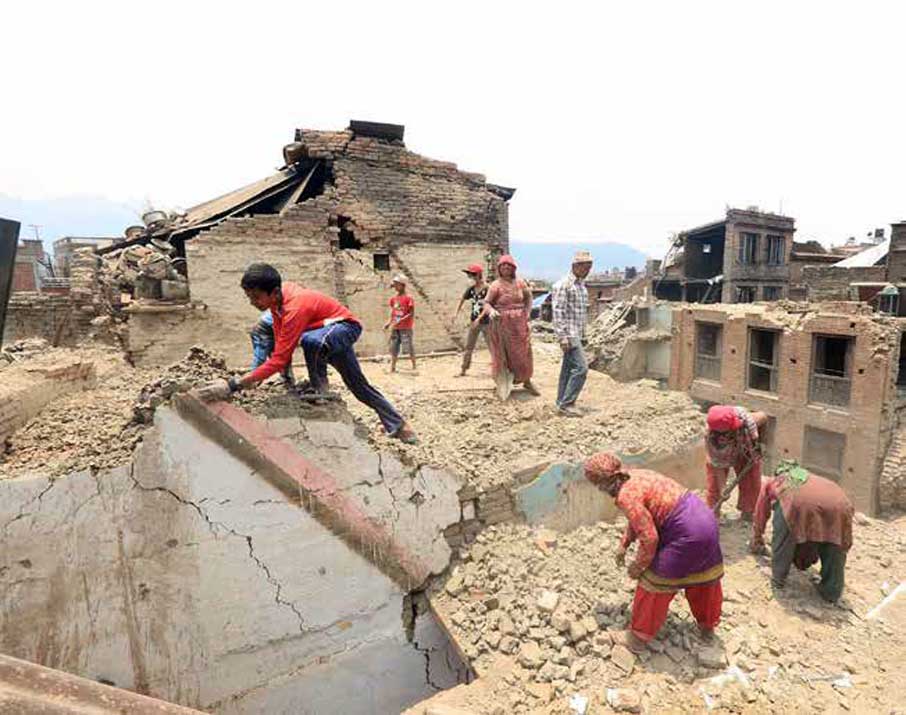 Yesterday — 25 April 2017 marks two years of disastrous earthquake which is still the worst nightmare for any Nepalese who had experience the catastrophic episode of terror and helplessness.

On 25th April 2015 — at 11:56 am Nepal Standard Time, a massive earthquake of magnitude 7.8Mw strike hard into the lives of Nepalese people resulting in more than 9000 death with at least 22000 injured. As it happens to strike on the weekly holiday Saturday, all school facilities were closed and saved thousands of children considering the significant damage on schools. It became one of the worst earthquakes felt in Nepal since 1934 (of 8.0 Mw), almost after 80 years.

2015 Nepal Earthquake, also known as Gorkha Earthquake was originated from depth of approx 5.1 miles to epicenter at Barpak region of east Gorkha. Just after the first strike, two major aftershocks of 6.6 Mw (within 34 minutes at 12:30 pm) and 6.9 Mw the next day (26 April 12:54 pm) and the series of aftershocks in every 10-15 minutes of scale of 4Mw to 5.5 Mw went for weeks until in 12 May, 2015 (at 12:50 pm), another huge shock of 7.3 Mw originated from near border of Tibet added more death and already existed distress to the lives of people.

Huge financial aids and assistance came from all over the world, but sadly the concerned authorities were unable to formulate a suitable framework for distribution of available funds and the already jeopardized lives of affected people deepen into misery. Now, after two years of the earthquake, there are people who are still waiting for government scheduled relief funds which it’s on its way, just taking little time. There are already several articles posted stating the failure of Nepalese government to address the victims and that is how, not even 5% of the victims have been able to re-construct their houses with multiple issues like name missing from the list of beneficiary of grants etc etc.

As per the Report of Nepal Reconstruction Authority

Nepal is one of the least developed countries of the world with developing economy. All the major social, productive and infrastructural sectors were affected which includes housing & settlements, health and education, cultural heritage, water & sanitation, hydropower plants, tourism, agriculture, employment and livelihood. Although it will take many years to recover the loss and damage with the snail pace of development — thousands of people returned from overseas and at the same time leaving seeking jobs to support their families with a remittance for reconstruction and household income.

When earthquake could not rest, another challenging episode came on the door of Nepalese people and this time it was the months-long fuel crisis triggered somehow because of the promulgation of the new constitution of Nepal. When the unsatisfied Madhesi people (of southern lowlands Terai) continues to generate more hazard situation through protest movement and strikes targeting to meet their needs on the newly drafted constitution, the virtual blockade of Nepal-India border invite turmoil into local lives without foods and fuels, raising black marketing and political instability. New Constitution of Nepal was formulated on 20 September 2015, at the cost of minimum 45 people, both civilians and police officers who were killed during the Madhesi protest.

At least 90 foreign nationalists also lost their lives during an earthquake. Several countries of the world issued “Travel Alert for Nepal” declaring Nepal is not safe to travel which automatically shatters one of the major economic sources of Nepal — Tourism. In 2015, tourist arrival declined due to earthquake and border blockade but the arrival jumped significantly in 2016 making an excellent rebound with the hope of same kind of continuity in later years. In addition to huge media exposure from around the world, locals and government bodies started with tourism promotion campaigns to spread the word “Nepal is Safe and Beautiful to Travel”. And it is getting better as many world leading travel magazines and websites has listed and ranked Nepal as Top Travel Destination even after the earthquake and Places to visit in 2017.

As people became more aware of the vulnerability of the earthquakes in Nepal due to its geological structure and lived in the open fields and streets for long time — there was always a hope and that stoic feature of Nepalese people which help built up the emotional well-being despite everything happened. And when slight aftershocks could be felt every once in awhile for almost a year and sometimes even these days remind us the nightmare we all went through.

For information about Earthquake in Nepal and its ongoing progress, check earthquake-nepal.com