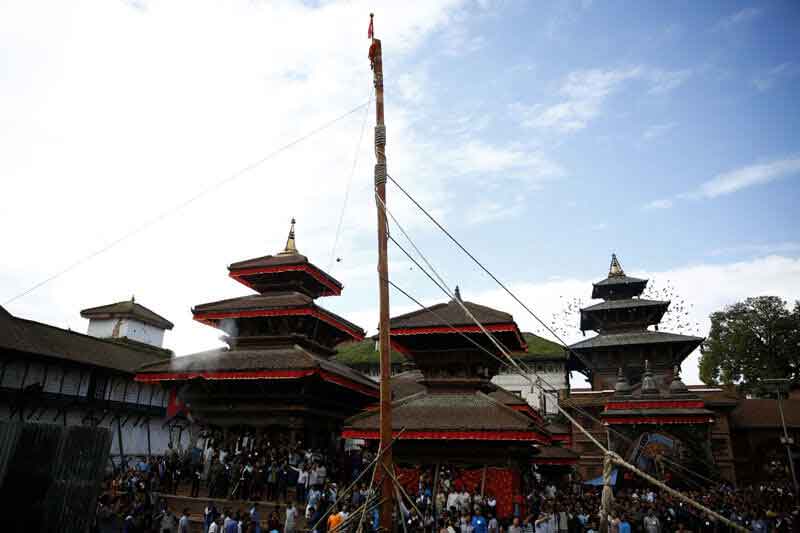 Someone asked me “What is Kathmandu?”, not how Kathmandu is but what Kathmandu is. I’m not sure that is a question which could fairly be answered in one or two sentences. The essence of Kathmandu cannot be contained in a few lines because the city is a spectrum of culture, architecture, people, food, festivals, landscape and much more.

Situated between two of the heavily populated countries in the world, Nepal is a small landlocked country. Drive from north to south for a few hundred kilometres and you’d end up either in China (Tibet) or in India. Likewise, drive about a 1,000 kilometres from east to west and you’d end up in India. But packed within that small area are landscapes and cultures that you’d not find in the biggest of countries in the world. In the central hills of Nepal, forming a valley lies Kathmandu. So what is Kathmandu?

Kathmandu is the vast diversity of a lot of things. It is home to diverse cultures and traditions. Kathmandu is the assortment of colours and energy in the streets of Asan during festivals, the swarm of people, the smell of candles, fruits and nuts, the inescapable smell of dried fish opposite the Annapurna Temple. The overhanging mannequins and dusty new clothes on the streets. The packed streets of Bhotahiti and loud speakers promoting ‘branded’ pairs of shoes for 100 rupees. 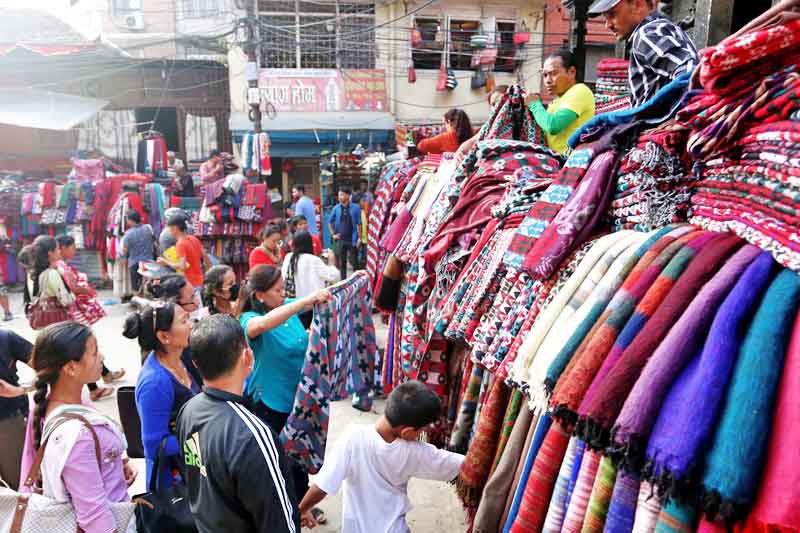 Likewise, Kathmandu is the traffic in Ratnapark. Oh! it is the dust and pollution in Ratnapark. The shopkeepers cramped up on the sidewalks in and around the city, the hustle and the noises. Over crowded micro-buses with people hanging from the doors and sometimes from windows too. And those potholes on the streets! Riding a bike, especially during the rainy days, and falling into those unknowingly, jerking your entire spine, that is Kathmandu.

Kathmandu is food you relish in its every street, nook and cranny. Kathmandu is momos! I’ve never tasted a good momo outside of the valley. Especially the ‘bhyaarbhyaare’ momos — the smell of it, the steam that blows your nose right off when you enter the small shops, the surge of warmth in that steam stimulates the gastric juices as you wait impatiently for those magical ball of meat (or vegetables) and flour.

Not just the momos but the local Newari cuisine, the choilas and baras, or just the simple Nepali daal-bhaat! The delicious lassi of Basantapur and DDC’s ice-cream. Kathmandu is ‘Basantapur ko Chiya’ (tea), which is more than just a tea – it is the flavour of bond that you share with your friends, the flavour of home which symbolises cultural homogeneity. Then there is the hot lemon of Sankata, among many other foods and drinks that are known as much for creating nostalgia as for animating the tastebuds.

Kathmandu is a bowl of energy and rush, some might say it’s just dust. But close your eyes and think of it, the streets of Jamal, the intersection in front of Tri Chandra College, the busy streets at Pradashani Marga or the crossing at New Baneshwor. The city has a life of its own! I’ve been to many cities by now and never have I encountered a place that has such life or at least that energy. 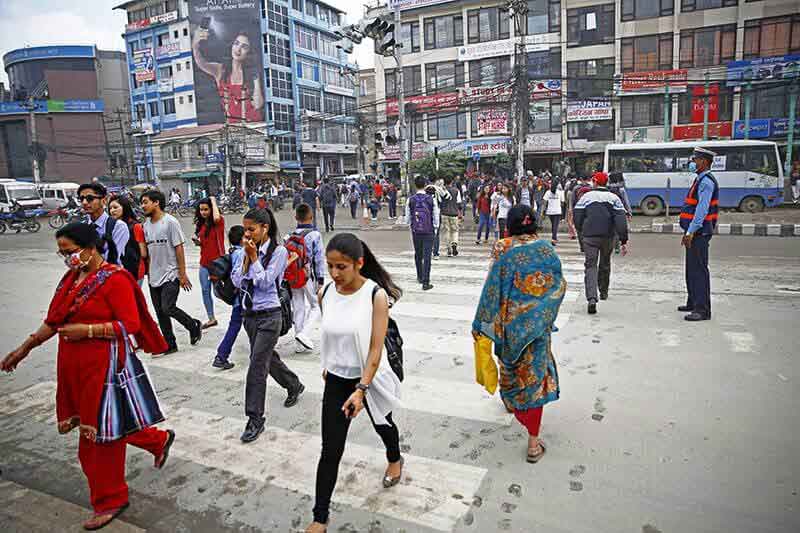 Pedestrians use zebra crossing to cross a road in New Baneshwor, in Kathmandu, on Tuesday, May 30, 2017. Photo: Skanda Gautam/THT

The vibrancy of Kathmandu is contagious. I’m not very religious myself but that endless queue of people in and around the city’s temples on Saturdays does not stop amazing me. The colours, the sound of bells ringing, the flock of pigeons hovering around in search of grains, and the clueless children running after the pigeons and enjoying to the fullest. Such moments make you stop and breathe in a city that never seems to take a break.

The bumpy roads, the insane microbus drivers, the unnecessarily loud honking, or the cows and bulls ‘netflixing’ and chilling right in the middle of the streets, watching the human drama.

Kathmandu is music and nothing adds to its melody more than the local festivals and jaatras. The traditional instruments and the music they produce is also Kathmandu. The blend of eastern and western cultures, that open-book is Kathmandu. The rush of Dashain and lights of Tihar, celebration of New Years – both Nepali and international, the calmness of Chhat, mindfulness of Lhosar, peacefulness of Christmas, and the display of brotherhood during Eid. The crowd and vitality of Machhindranath’s Jaatra and the excitement of Hadigaun’s Jaatra. Kathmandu is all that.

A Nepali school girl dressed in a traditional attire performs during cultural programme held to celebrate ‘Guru Purnima’ festival or Teacher’s Day at a school, in Kathmandu, on Friday, July 27, 2018. Photo: Skanda Gautam/THT

The monsoon rain, the clear sky next morning, the summer’s heat, and the winter’s cold that is stolen away by the afternoon sun. The view of mountains. The upward and downward slopes, the diverse landscapes within such a small place – that is Kathmandu. The 360-degree rolling hills, the hiking routes, the monasteries on hill-tops, and the incredible view from up there. 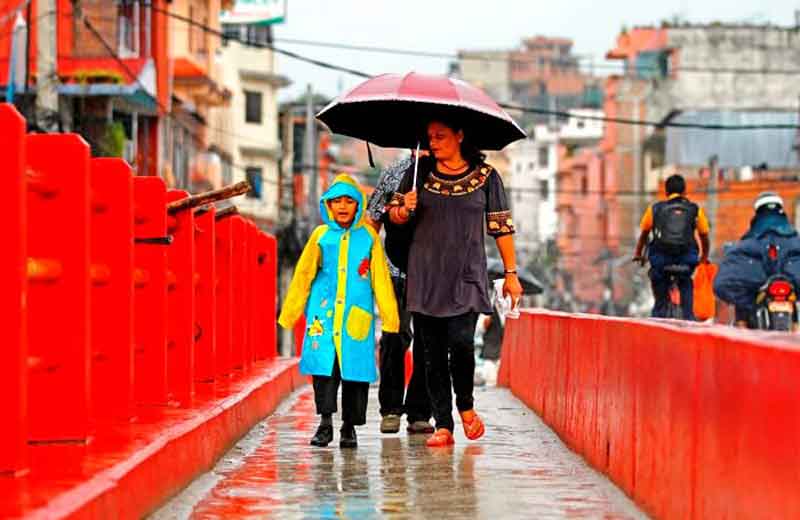 Woman shields herself and her son from rain, in Kathmandu, on June 2015. Photo: Skanda Gautam/ THT

Kathmandu is the mismanaged and congested houses that look like match boxes fallen out of order. That is the charm of it — not everything that looks perfect is beautiful, sometimes imperfect is all you need for it to be perfection. Kathmandu is everything! Be it dusty, polluted or noisy! Kathmandu is love! Kathmandu is HOME! I was just asked a question and I replied to the person in a few sentences, but I wanted to say all this and much more.

First Published in The Himalayan Times