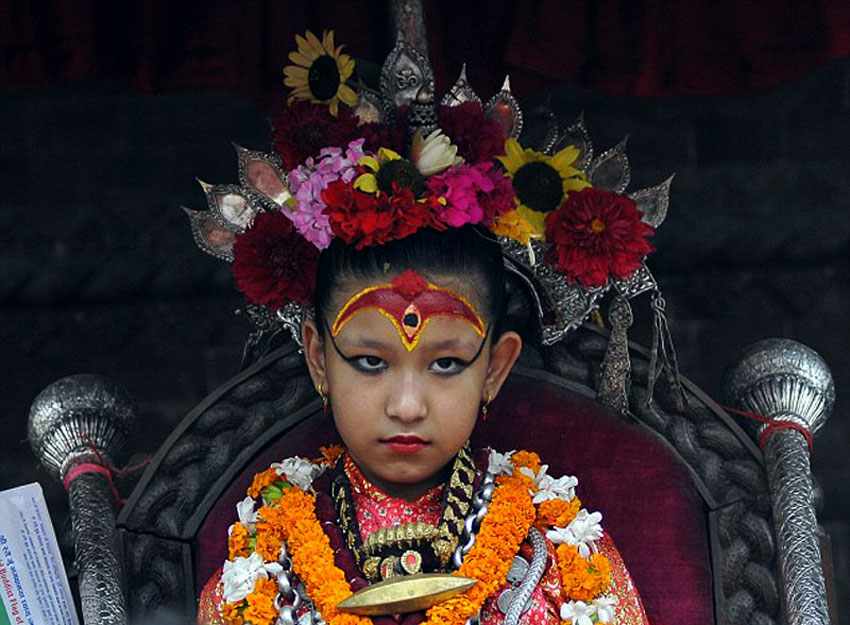 Who says that God doesn’t exist? Tell them to visit Nepal and see for themselves. Nepal is the only one country in the world where the Living Goddess exists.

Kumari — meaning “virgin’ in Nepalese — is a sacred name for the “Living Goddess of Nepal” who is picked to be a deity at the young pre-pubescent age to serve as the manifestation of the divine energy of Hindu Goddess Durga.

Nepal is a Himalayan country filled with amazing wonders and surprises. And the tale of the living goddess is something that will tell you the cultural practice and beliefs of people. The mystic syncretism of Hinduism and Buddhism has given a very unique way of lifestyle for the local Nepalese and it can be felt among the people during events and festivals in Nepal, which are many by the way.

Kumari is the sacred Living Goddess of Nepal, regarded as the embodiment of the supreme female deity. For Buddhists, she is the manifestation of female Buddha Vajradevi and for Hindus, a manifestation of Goddess Durga as Taleju.

How is Kumari selected?

Not every girl can become a Goddess.

Choosing a Kumari is quite a rigorous process and must be selected by Newar Priests. She is chosen and kept in a small house known as “Kumari House” where she lives and follow up the daily rituals and ceremonies.

First thing, she must belong to Newar Shakya clan, a Buddhist family. She must never have lost a drop of blood (no bleeding) and her horoscope should match the horoscope to King/President.

To be the Goddess, one must possess 32 virtues or 32 perfection, which resembles the virtue of Bodhisattva. With the change in generation, it has been difficult to identify the 32 signs of perfection and only considers the major attributes like,

During a ‘black night’ ritual, the fearless nature of the child is tested.  One hundred and eight buffaloes and goats are sacrificed and several heads are illuminated by candles and demon masked men dance on the ceremony at Taleju Temple and she must spend a night with the bloody slaughtered heads of the animals showing no fear. If she passes the test without showing any fear, then she will be taken for cleansing ritual from past life.

Life as a Living Goddess

She is always dressed in red— the color of creative energy, wear hair in a topknot and have a “Fire Eye’ painted on forehead signifying her wisdom and power of perception.

She is taken care by a group of people known as “Kumarimi”, who fulfills every need she demands and also guide her through daily lifestyle. Most of her time is spent on worship and studies.

She sits upon a glided iron throne inside the house and also believed to have special powers to heal suffering from blood disorders, fulfill wishes and bestow blessings. And, her feet should never touch the ground. She is always carried in arms or in a palanquin.

She rarely meets the people from outside world but few petitioners customarily bring offerings and gifts to her to whom she does not speak and receive everything in silence. During these meetings, her various acts like crying or loud laughter, weeping, trembling, hand clapping, picking gifts symbolizes different kinds of meaning like serious illness, death, imprisonment, fear and financial losses. And if she remains calm and silent throughout the meeting, it means that wishes have been granted.

She is rare to the public and only leaves the house during special occasions and ceremonies. On other days, she occasionally peeks out in the window and waves her hands to the public. It is believed that, only a glimpse of Goddess Kumari is believed to bring a good fortune.

The foremost thing while being a Living Goddess is that she must not loses any blood. It is believed that the spirit of the Goddess Shakti will leave if she bleeds.

Journey from Goddess to Ordinary Life

The Goddess remains no longer a Goddess after the first menstruation and she has to go back to ordinary life. In past days, Kumaris were not given any kinds of formal education which lead to many difficulties in ordinary life after her tenure as a Goddess. But now, they are tutored privately in the Kumari House and later join education facilities to pursue the normal lifestyle after being done with the Goddess. It would be little different to normalize for them after spending much of their childhood years in the same isolated room with so-minimum links to outside world, and most of the time worshiping and following daily rituals.

The Living Goddess is the manifestation of Hindu Goddess Durga who must be chosen from a Buddhist family.

On the third day of the eight days Indra Jatra festival in Kathmandu, the Living Goddess is taken in a religious procession on her chariot around the valley for three days and thousands of devotees are gathered to seek her blessing or just her glimpse. And each year, during this festival, the President (used to be King before 2008) also seeks the blessing of Royal Kumai for the welfare of the country.

The history of Virgin Goddess dates back to 6th century. But it came into more light in the 13th century when the temple of Taleju Bhawani was setup in Bhaktapur and Kumari selection process and ornaments were designated. And even more into the practice in the 17th century after the unification of Modern Nepal by Prithvi Narayan Shah of Gorkha. However, the traditions of Royal Kumari were re-instated in 1922 A.D and continuing till date.

As per the evidence collected, the culture of worshipping Virgin as Goddess dates back 2 millennium BC.  Goddess Taleju is as one of the important deity in Hinduism and Kumari is regarded as her incarnation.

The Royal Kumari is the most important among other Kumaris of Patan and Bhaktapur and lives in “Kumari Ghar” at Kathmandu Durbar Square constructed in 1757 A.D. by Jaya Prakash Malla (last king of Malla Dynasty of 12th – 17th century).

Legends behind Living Goddess of Kumari

There are several tales and legends related to the beginning of this unique culture of virgin worship. According to the popular legend, King Jaya Prakash used to play a dice with Goddess Taleju (as human form) every night in his Palace’s chamber with a condition that he will tell anyone about her visit. But his suspicious wife came to know about him spending time with Taleju and playing dice all night. And Taleju spots his wife and got angry. She told the King that there is only one way if he wants her to protect the country, that he should to find a Newari virgin girl and then she will be incarnated on the virgin soul as the living goddess.

Similarly, there is another story where the King Trailokya Malla used to meet the Taleju Goddess to play dice game in his palace every night while they discussed the well-being of the country. But one night during the game, King made a sexual advance towards the Goddess and she became angry and left the palace, never to come again. Filled with so much regret, he starts to worship the Goddess and appeal her to come back to forgive him. Instead, Goddess Taleju agreed to appear into the virgin living soul of Buddhist child chosen from the Newar community.

Nepal is known around the world as the country surrounded by World highest Himalayas and the Birthplace of Lord Buddha. There is no doubt that Nepal is one of the inimitable travel destinations for all the nature lovers and culture hunters.