Prayers Flags are no surprise to us now, especially travelers who have travel around the Himalayan countries of Asia like Nepal, Tibet, India, Bhutan or maybe you have seen them in just pictures or documentary movies. These sacred flags are often seen fluttering with the wind, as they are usually placed or hung at high places such as top of monasteries, view-points, stupas, mountain passes, peaks, summits or even a rooftop of house.

You know them but do you know about them? No Worries, you can about to find them. 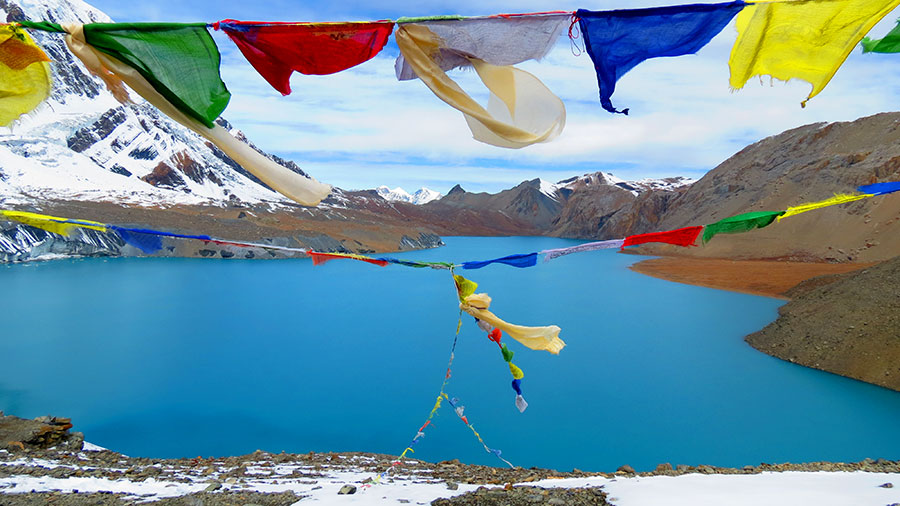 The major significance of prayers flags are to spread out the positive vibes and energy to bring happiness and well-being to all. And these vibes does not come that easily. These prayers flag are compilation of scared symbols and mantras; it should never touch the ground and always placed in the height where it can meet the wind to flow the positive vibration of the divine to all.

Other important aspects of prayers flag are the colors used on them — there are five different colors used in these flags with Buddhist mantras imprinted on them. The five colors are Red, White, Green, Yellow and Blue, which holds their own significant meanings and most importantly represents five elements of life. It is said that the balance among these five elements will bring good health and harmony.

Symbols and Texts of Prayers Flags

The printed texts on prayers flags are Mantra, Sutras and Prayers where,

Mantra is a powerful single or series of sacred syllable that can influence the energy dimensions and also create a form of meditation in continuous repetition. These are mostly written in ancient Sanskrit language.

Prayers are the short verse of teachings by great Buddhist masters and Bodhisattva throughout time, about life, desire, happiness and various other subject to generate the positive energy and vibration to spread to the world.

The meaning of symbols is far deeper than we think it is and can only be interpreted by great teachers and masters. There are four animals printed in the outside corner of the flag which represent the attributes and attitudes to pursue the path of knowledge and spiritual path to enlightenment. These four animals personify Wisdom (Garuda), Gentle Power (Dragon), Fearless Joy (Snow Lion) and Confidence (Tiger).

Not all the prayers flags have the same text, it differs as the sutras and mantras are different. More than 400 scripts can be found in prayers flag.

“Blessings spoken on the breath of nature”

Originally hand-written, these scripts were derived from the ancient manuscripts and believed to be very powerful to create a strong positive energy to spread and influence peace and compassion as ‘silent prayers’ among all the beings with the aid of wind.

Legend says that the prayers of Lord Buddha were written on the flags during the battle by deities against the demons. However, first use of these flags dates back to Bon tradition, a pre-Buddhism Tibetan practice where they used five color cloths as five elements of life in healing ceremonies by seeking out the balance between these five elements.

In 8th century, Buddhism was introduced in Tibet, and got combined with their old school shamanistic Bon tradition, and led to the origin of today’s Tibetan flags containing scripts from both practice. The modified prayers flags came into existence around 11th century, when a Buddhist monk “Atisa” start the practice of writing it on cloth and start hanging them and eventually got popular later in 15th century with a wood block printer, as the wooden plate with all scripts and symbols were designed by mutual effort of skilled craftsman and great masters to print them and hung them everywhere.

There are several kinds of prayers time, but mostly divided into two major kinds:

Lung Ta, a horizontal large rectangular shaped flag hung in a diagonal string or pole from high to low. The literal meaning of the word “Lung’ is ‘Wind’ and “ta” is ‘Horse’ i.e. ‘Wind Horse’, — a mythical Tibetan creature that carries a prayers to heaven by combining force of the wind and strength of the horse. ‘Wind Horse’ is commonly associated with the positive energy, compassion and a virtue to defeat negative and path to enlightenment, hence also known as “Wish Fulfilling Jewel of Enlightenment”.

Higher, the better as the wind is strong and the prayers can reach to unreachable!

When the prayers flag starts to fade, it means the wind has pass the prayers over all beings. These old flags are normally replaced with new flags, or sometime hung over the old ones. The best time to replace old ones or place new ones is Chinese New Year. The dates are very essential while placing these prayers flag, and any inauspicious time might also bring misfortune and bad omen.

These prayers flags are also used for decoration in houses and offices, as the colors and mantras will bring good fortune and proper balance with element of life. Not only for the spreading prayers but these flags are also used during times of great happiness or sorrow.

Hanging a prayers flag selflessly is one good deed everyone can do to spread the positive energy, happiness and well-being to all.